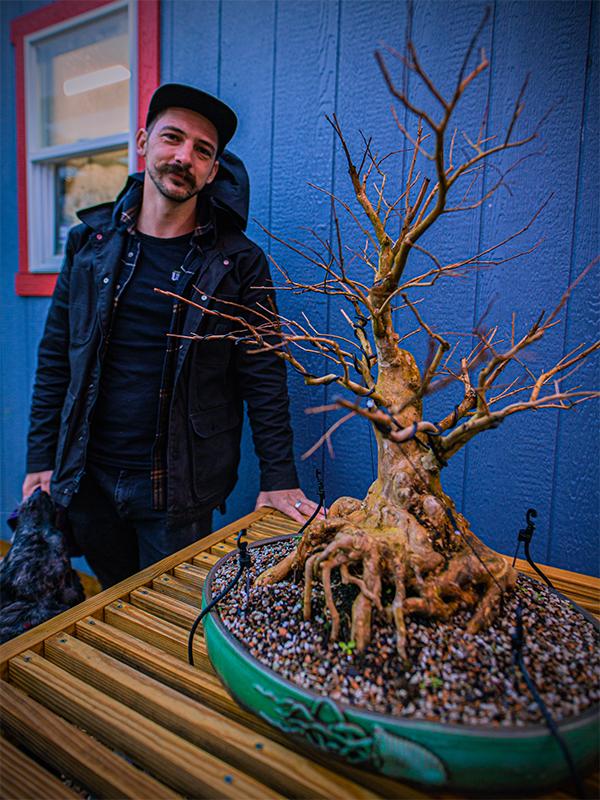 Evan’s interest in bonsai came at a young age. He recalls times of isolation as an introverted child exploring the large property he grow up on in southern Louisiana and seeing old growth woodlands. He would spend several hours scouting sandy creeks and searching for ideal spots to set up camps and heighten his imagination. Bonsai portrays these fantasy getaways where wise old trees dwell to tell a story. The existential thoughts that a well designed bonsai speaks is what fueled Evan’s intrigue in the art form. Reaching out to bonsai professionals and other artists to gather up knowledge for concept and design became Evan’s pastime and now he has decided to take it to next level as a career path.

Being a Louisiana native helps Evan visualize the dramatic ecosystem that is right outside his back door. From the heavy wooded pine forests to the haunting marshlands where bald cypress reign as old kings. A lot of Evan’s influences lay in the folklore and folk art of Southern Louisiana. Being able to immersive himself in the local culture and favor as well practicing the art of bonsai has further enriched his life as a whole.

Evan has a history in art and has been involved with bonsai for 10 years now. Underhill Bonsai is the perfect environment to further his skills and knowledge of his beloved craft. He loves teaching others and working along side others to help guide their hand to further express themselves through the art. Evan likes to bring key principles to the table when talking about bonsai such the golden mean, horizon lines, and prospective.